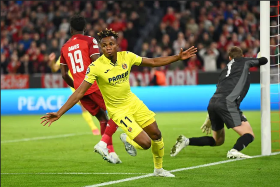 Spanish La Liga side Villarreal have advanced to the semifinals of the UEFA Champions League for only the second time in their history after defeating Bayern Munich 2-1 on aggregate on Tuesday night.
Samuel Chukwueze was the hero for the Yellow Submarine, scoring a crucial equaliser four minutes after coming off the bench, with his shot going into the ground and over goalkeeper Manuel Neuer.
On 88 minutes, the Nigeria national teamer silenced the Bayern Munich fans at the stadium when he finished off a sweeping counter attack started by Dani Parejo and with Gio Lo Celso and Gerard involved in the build-up.
Villarreal boss Unai Emery has underlined the key role played by Chukwueze in knocking out Bayern Munich, saying the winger scored the all-important goal that sent his side through to the last four.
In quotes relayed by Futbol Fantasy, Emery told reporters at the post-match press conference : "We were going to find ours, because we also have good players, dedicated people who were very important and then, on top of that, we had to know how to find our five moments in the match, five.
"Of those five, we had to take advantage of them and that's how we have done in Samu's action.
"The other day he came out and it was better that he hadn't been taken out,... but today, giving him another opportunity in a positive but demanding sense, because he scored the goal. It's the way of the team".
Villarreal will face the winner of Wednesday's quarterfinal tie between Liverpool and Benfica in the Champions League semifinal.
Ifeanyi Emmanuel
Photo Credit : uefa.com
Copyright ANS
All rights reserved. This material, and other digital content on this website, may not be reproduced, published, rewritten or redistributed in whole or in part without prior express written permission from allnigeriasoccer.com