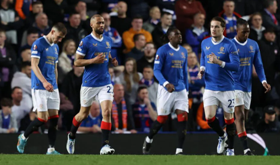 Joe Aribo was one of the players singled out for praise by former Manchester United midfielder Owen Hargreaves in the wake of Rangers' 3-1 win over Sporing Braga in the Europa League.
The Nigerian midfielder put in an outstanding display, providing the assists for Rangers first and third goal scored by
James Tavernier and Kemar Roofe respectively.
The dazzling performance from the 25-year-old saw him named in the Europa League Team of the Week as the best rated player by Whoscored.com.
A goal would have capped off a fine performance by Aribo but the Rangers number 17 saw his left-footed shot narrowly miss the target in the 51st minute.
In quotes relayed by HITC, citing BT Sport, Hargreaves said : "There were so many great performances. Kemar Roofe deserved his goal, Aaron Ramsey had his best performance in a Rangers shirt and Joe Aribo was absolutely terrific, got a couple of assists".
Aribo has directly participated in 18 goals (8 goals, 10 assists) at club level in 2021-2022 - his career-best in a single season.
The former Charlton Athletic man will be hoping to deliver again on Sunday when Rangers face off with Celtic in the semifinals of the Scottish Cup at Hampden Park.
Ifeanyi Emmanuel
Photo Credit : uefa.com
Copyright ANS