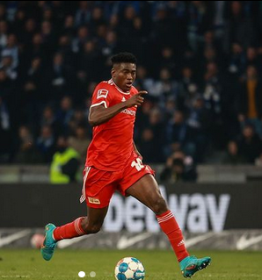 Union Berlin have climbed to sixth in the German Bundesliga table after a 2-0 win over Eintracht Frankfurt at An der Alten Försterei on Easter Sunday.
The capital outfit broke the deadlock in the seventeenth minute when Taiwo Awoniyi held off challenges from Martin Hinteregger and Evan N’Dicka and fired past the Eintracht Frankfurt goalkeeper.
In doing so, he took his tally for the season in the league alone to thirteen goals, setting a new club record for most Bundesliga goals in a single season.
The previous record of twelve was set by Sebastian Andersson in the 2019-2020 campaign, before Awoniyi equaled it when he found the net against Cologne on April 1, 2022.
The 2013 U17 World Cup winner is now the fourth highest scoring Nigerian in the history of the Bundesliga with nineteen career goals, overtaking the legendary Eintracht Frankfurt attacking midfielder Austin Okocha who notched 18 goals in 90 top-flight appearances.
Grischa Prömel doubled Union Berlin's advantage in the 21st minute and Awoniyi could have made it 3-0 on 63 minutes but struck over the crossbar.
Of the Nigerian players to grace the Bundesliga, only Jonathan Akpoborie (60), Victor Agali (32) and Anthony Ujah (30) have scored more goals than Awoniyi.
Ifeanyi Emmanuel
Copyright ANS