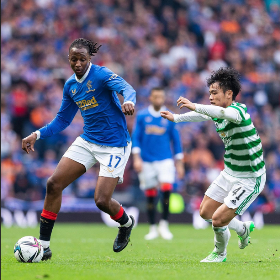 Former Leeds United striker Noel Whelan has insisted that Rangers will find it very difficult to retain the services of Joe Aribo in the summer.

The Nigeria national teamer will enter the final one year of his contract with the Light Blues on July 1, 2022 and has no intention of renewing his deal.

It is understood that several Premier League clubs including Crystal Palace are keeping tabs on the versatile midfielder ahead of a summer swoop.

Whelan is of the opinion that Rangers are likely to push up their asking price for the 25-year-old if they qualify for next season's UEFA Champions League either by winning the Europa League or the Scottish Premiership.

"Getting that guaranteed European football puts them in a stronger negotiating position, " Whelan told Football Insider.

"But I just think, whether it’s Rangers or Celtic – when Premier League clubs come calling, it’s always difficult to turn them down.

"The money they can offer Rangers would be astronomical, and then there are the wages they can offer the player as well. It would probably set them up for the next two years.

"They’re going to find it very difficult to keep hold of Aribo. He’s probably got aspirations of playing in England – and as a player, that is where you want to be."


Aribo is having his best season since turning professional in terms of goal involvements, with eighteen (8 goals, 10 assists) from fifty appearances in all competitions.
Igho Kingsley
Copyright ANS