'It's time to move on' - Agent reveals Randers star Kehinde is monitored by English, German clubs 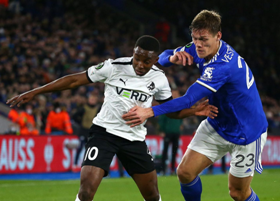 Tosin Kehinde's bona fide agent Emmanuel Oluwole Idowu has revealed that it is looking likely that the former Nigeria U23 invitee will be bidding farewell to Danish Superliga side Randers in the summer.
The Manchester United academy product will enter the final one year of his contract with Randers on July 1 and the logical step is either he signs a new contract or be sold to enable the club recoup part of what they've spent on the winger.
Kehinde, 23, proved he has really come of age by putting in a string of impressive performances for Randers in Europe this season, making ten appearances in total and bagged assists against big clubs Galatasaray and Leicester City.
He has the ambition of forcing his way into the Super Eagles setup in the not too distant future and this will play a key role in his next destination.
"If he wants to sign a new contract in Denmark, he can get that. Tosin is growing strong in Denmark, he has developed and I think it's time to move on," Idowu, the CEO of IOM Sports and Entertainment Limited, told allnigeriasoccer.com.

"The club will be happy for him to take a step up so it's not going to be difficult for him to leave in the summer.

"Obviously the question will remain what's the best league for him to go to, he can't go to a league where he's not going to be recognized as he's trying to break into the Super Eagles and trying to make himself known to the Nigerian fans on a larger level."
A return to England to has been mooted with Queens Park Rangers among his admirers in the Championship, but Idowu was careful not to drop names of clubs given the sensitive nature of negotiations though he confirmed that Bundesliga and French clubs are also tracking his client.
"Returning to England is not an absolute must for the very reason that he has to be in a situation where he's playing week in, week out, and where he will get into the Super Eagles.

"We have options in the German Bundesliga, France and England, and we are going to make the best possible decision.
"Tosin is the one that will make the final decision but my job is to help him make the right decision," Idowu added.

Kehinde joined Randers in July 2019, first on loan before the move was made permanent the following season, and has gone on to make 92 appearances for the East Jutland club, scoring seven goals and setting up sixteen others.
Ifeanyi Emmanuel
Copyright ANS