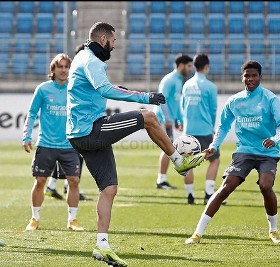 The Royal Spanish Football Federation are ahead of Nigeria and Morocco for the services of highly rated Real Madrid central defender Marvelous Antolín Garzón, allnigeriasoccer.com reports.
Marvelous was born in Casablanca to a Nigerian mother who crossed Morocco to Spain along with her newly-born baby.
The 19-year-old was later naturalized by Spain after being adopted by a Spanish couple who gave him his current surnames Antolín, from his adoptive father, and Garzón, from his adoptive mother.
It has come as a surprise that the Nigerian Federation have not made a move to provisionally cap-tie the promising defender, as well as Morocco where he was born, despite the progress he has made at Real Madrid this season.
Garzon has been capped three times by Spain U19s and was called up for their March internationals against Austria and Denmark but was an unused substitute in both matches, paving the way for him to represent either of the African nations without requesting a one-time change of association.
The left-footed central defender is highly thought of by the powers that be at Real Madrid, having been called up to train with the first team on several occasions.
Garzon currently plays for Real Madrid Castilla, making three appearances in the Primera División R.F.E.F. - Grupo II this season and played eight matches in the UEFA Youth League before Los Blancos were knocked out of the competition in the round of 16.
He started his career at Real Madrid and had stops at Atlético Madrid, RSD Alcalá,Rayo Vallecano, before returning for a second spell with Real Madrid in 2016.
Andres Lopez
Photo Credit : Instagram
Copyright ANS