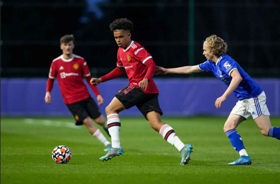 According to United's official webpage, the Manchester United players who didn't feature in the defeat to Liverpool earlier this week were present at Carrington on Thursday morning.

There is a slight chance of Shoretire, who has played in the middle of the park for the development squad in recent weeks, being named in the traveling party to the English capital if the early team news is anything to go by.

Paul Pogba is a huge doubt for the game against Arsenal having suffered a calf injury at Anfield and Brazilian midfielder Fred has a hip flexor problem that kept him out of the team against Norwich City and Liverpool.

Shoretire has featured just once for the first team and that came against BSC Young Boys in the Champions League, his only squad involvement to date so far this season.


The England U19 international of Nigerian descent has been one of the star performers for United's youth teams in 2021-2022, scoring eight goals and assisting nine others in twenty seven outings.
Ifeanyi Emmanuel
Photo Credit : ,manutd.com
Copyright ANS
All rights reserved. This material, and other digital content on this website, may not be reproduced, published, rewritten or redistributed in whole or in part without prior express written permission from allnigeriasoccer.com