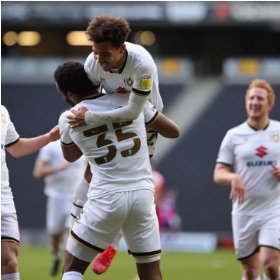 Championship outfit Swansea City have Nigeria-eligible left-back Matthew Sorinola on their radar ahead of the opening of the transfer window.
According to Football League World, the Swans are considering a summer move for Royale Union Saint-Gilloise defender Sorinola.
It would be a reunion of sorts if the deal goes through as Sorinola and current Swansea City manager Russell Martin worked together at MK Dons.
The Anglo-Nigerian played 45 matches with Martin in the dugout, scoring two goals while providing six assists.
It remains to be seen whether Sorinola would be keen to return to the England, given that Royale Union Saint-Gilloise are well placed to qualify for next season's Champions League.
Having said that, the fullback has seen his first team opportunities diminished since start of the year, logging a paltry 25 minutes from 14 matches in the Pro League.
A product of the Fulham academy, Sorinola has a contract with RUSG until the summer of 2024.
Ifeanyi Emmanuel
Photo Credit : mkdons.com
Copyright ANS