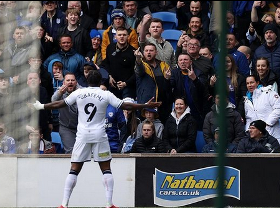 Michael Obafemi's recent purple patch for Swansea City has not gone unnoticed by clubs in the Premier League.

According to Football League World, Brighton & Hove and Watford are keeping tabs on the Southampton academy product with a view to a summer swoop.

In his last twelve outings in the Championship, the 21-year-old has directly participated in eleven goals (8 goals, 3 assists), eight more than he tallied in his first eighteen league matches of the season.

The Seagulls have identified Obafemi as a target to provide competition for Neal Maupay and Danny Welbeck next season.

As for Watford, who are on the brink of being relegated, they could be plotting a move for the Irish-Nigerian with the futures of Emmanuel Dennis and Ismaïla Sarr up in the air.

Obafemi is cap-tied to his country of birth Republic of Ireland having made his competitive debut in a UEFA Nations League clash against Denmark in November 2018 at the age of eighteen.

Under FIFA rules, players are allowed switch allegiances providing they had played no more than three competitive international games before the age of 21, meaning Obafemi is now eligible to request for a one-time change of association should he decide to represent Nigeria.