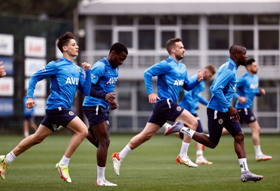 Bright Osayi-Samuel trained fully with his Fenerbahce teammates on Saturday (as pictured) ahead of their next game in the Turkish Super Lig against Besiktas.
The Nigerian-born defender did not take part in the Yellow Canaries' 3-2 home win against Gaziantep FK on Friday as he was still recovering from injury and in his stead, Nazim Sangare slotted in at right-back.
Osayi-Samuel has mostly been deployed as a fullback this season, though his preferred position is a winger, the role in which he starred during his time with Queens Park Rangers and Blackpool.
After struggling initially when he landed in Istanbul, the 24-year-old has now established himself as a key player this season, making 41 appearances in all competitions, with 29 of those in the Super Lig.
Fenerbahce are the form team in the division, winning their last five matches, but the best they can finish is second as Trabzonspor were crowned champions on Saturday with three games to spare.
Osayi-Samuel, who is open to representing the Super Eagles, is tied to Fenerbahce until June 30, 2025.
Igho Kingsley
Copyright ANS