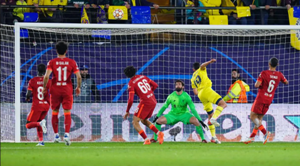 Samuel Chukwueze was a second substitute for Villarreal but was ineffectual in their 3-2 defeat against Liverpool in the second leg of their UEFA Champions League semifinals clash which eliminated the Spaniards 5-2 on aggregate.

Villarreal went two goals up in the first half with goals from Boulaye Dia and Francis Coquelin.

Senegalese striker Dia poked home the ball from close range after good work from Pervis Estupinan who lobbed the ball into the 18 yard box which Etienne Capoue laid on the path of African star.

Liverpool had their first chance to restore parity in the 23rd minute but Salah fired wide after evading the attention of two markers.

Giovani Lo Celso went down under minimal challenge from goalkeeper Alisson in goal for the Reds but there was no penalty for the Yellow Submarine.

Coquelin then made it 2-0 and 2-2 on aggregate with four minutes before the break with a great header from Capoue's cross.

Trent Alexander-Arnold's long range shot deflected off Coquelin after the restart and the ball came off the woodwork for a corner but Fabinho got a goal for Liverpool shortly afterwards with a fierce shot at the edge of the box.

Luis Diaz was second time lucky in the 67th minute as he got Liverpool's second goal with a close range header.

Samuel Chukwueze entered the game as a substitute to replace Gerard Moreno in the 70th minute.

Sadio Mane then made any chances of Villarreal comeback impossible with the third goal for his team as he rounded Geronimo Rulli in goal for the Spanish team.