Subscribe
Emery explains why an unfit Moreno started ahead of Chukwueze in loss to Liverpool
Published: May 04, 2022 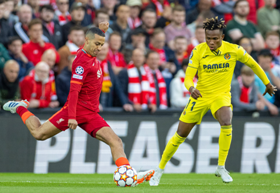 Villarreal were eliminated from the UEFA Champions League on Tuesday night after a 3-2 loss to Liverpool at the Estadio de la Cerámica.
The Yellow Submarine defended excellently in the first half of both legs with no goals conceded, only to crumble in the second half in which they shipped five goals.
Unai Emery's gamble to field the unfit Gerard Moreno backfired as the Spain international struggled as a result of his injury and was replaced by Samuel Chukwueze in the 68th minute.
Moreno missed the first leg at Anfield due to a hamstring discomfort and was not in tiptop condition for the visit of Liverpool.
Emery has explained that he had no choice but to field the patched up striker because two Nigerian-born attack-minded players in Samuel Chuwkueze and Arnaut Danjuma did not put pressure on Liverpool central defenders Virgil van Dijk and Ibrahima Konaté during the first leg at Anfield.
Asked what he told his players at halftime, Emery said to reporters at the post-match press conference : "We played with Gerard Moreno who is very important for the team in many, many ways.
"We could duel with them very close to their defenders, we couldn't do that in the first leg, not Samuel, nor Danjuma. We couldn't win positions with their defence that allowed us to create clearer chances in attack.

"We could do that with Gerard in the first half but he told me at halftime he was feeling pain from his injury again and we knew he was not going to be the same in the second half, but he wanted to play and make a huge effort."
Igho Kingsley
Photo Credit : liverpoolfc.com
Copyright ANS