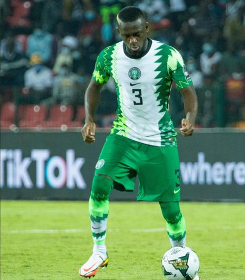 Paderborn Managing Director Fabian Wohlgemuth has confirmed that Collins will be moving on to pastures new in the summer.

The 27-year-old has entered the final two months of his contract with Paderborn and has turned down the club's offer of a new contract.

A product of Abuja Football College Academy, Collins joined Paderborn in September 2017 and has racked up 137 appearances for the club in all competitions, with 30 coming in the Bundesliga.

The Nigeria international helped Paderborn earn back-to-back promotions to reach the German Bundesliga in the 2019-2020 season.

With a departure on the horizon, he has not been included in the matchday squad in the last three matches played by Paderborn in the second-tier, though it may be due to fitness concerns.

"Jamilu is planning his future outside of Paderborn," Wohlgemuth said to German regional newspaper  Neue Westfälische, according to Liga 2 online.