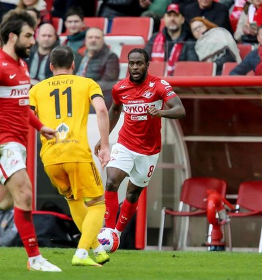 Victor Moses ended his goal drought in style as Spartak Moscow defeated Ural 3-1 on matchday 28 in the Russian Premier League on Saturday.

The former Chelsea winger had failed to deliver the goods in ten successive matches in all competitions - one in the Europa League and nine in the top-flight - before the Red and Whites visited the Ekaterinburg Arena.

Shamar Nicholson, with a header, opened the scoring for the visitors at minute 11 and Moses set up his team's second goal netted by  Nicholson on 26 minutes.

The former Nigeria international, who was denied by a brilliant save from the Ural goalkeeper in the 14th minute, finally rediscovered his scoring touch when he pounced on a loose ball and slotted into the bottom corner from a tight angle.

Moses' goal in the 30th minute ended a run of 881 minutes of game time without a goal in all competitions for Spartak Moscow, a run stretching back to December 4, 2021 when he opened the scoring in a 2-1 win vs Akhmat Grozny.

The 2013 Africa Cup of Nations winner picked up the official Man of the Match award for his outstanding performance against the team from Yekaterinburg.

Man of the Match 🌟 pic.twitter.com/LRkwl0BqYh

Moses conditionally reversed his decision to quit international football earlier this year, before the Super Eagles' failure to qualify for the 2022 World Cup in Qatar.