Subscribe
Ex-Chelsea star Moses highlights his versatility by naming five positions he can play
Published: May 08, 2022 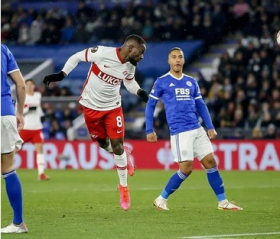 Former Chelsea star Victor Moses has underlined that he is ready to play in multiple positions to help Spartak Moscow achieve their objectives.

Moses put in a man-of-the-match display as the Red and Whites defeated Ural Yekaterinburg 3-1 in the Russian Premier League on Saturday, scoring and providing an assist in the same game for the first time in his Spartak Moscow career.

The 2013 Africa Cup of Nations winner actually started his career as a center forward and was likened to former Barcelona superstar Ronaldo de Lima, before he was converted to a winger whilst at the Crystal Palace academy and changed positions again to wing-back during Antonio Conte's reign as Chelsea manager.

Manager Paolo Vanoli has deployed the 31-year-old as a left midfielder in recent matches and he operated from the right in the win at Ural.

Moses, who worked with Vanoli for three years combined at Chelsea and Inter Milan, has named five positions he can play.

Speaking post-match to Spartak's YouTube channel, Moses explained : "Right from the very first time I came to Spartak I'm down to play in any position. I can play left-back, right-back, 10, right wing, left wing.

"The most important thing is to help the team and I am very pleased to do that today.

"It's about the team effort, we all came here today to get the three points so we worked very hard collectively and individually as well. We played for the three points, now we can move from here now.

"I'm happy with the manager getting the three points today, he's someone that I know very well.

"Inter Milan we worked together, he's a manager that can rotate to any formation and he's very good at that."

Moses ended a run of ten games, 881 minutes without getting on the score sheet when he found the net in the 30th minute against Ural.