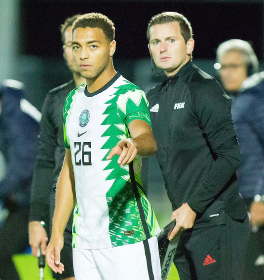 The Nigeria Football Federation on Tuesday released a list of 30 players invited by Super Eagles assistant coach Salisu Yusuf for the international friendly matches against Mexico and Ecuador on May 28 and June 2.

There are regulars in the team as well as a few players that Nigerian football faithful has been clamoring for to be invited to the team.

In this feature, Izuchukwu Michael presents five players that could be regulars on the 'new Super Eagles' should they play exceptionally well in those friendlies.

It is unsure if the home based duo of Ojo Olorunleke and Adewale Adeyinka (Akwa United) will be in between the sticks when the Eagles face  World Cup bound Mexico and Ecuador.

However the non invitation of the duo of Francis Uzoho and Daniel Akpeyi especially the latter (Akpeyi) suggests that there is a genuine belief that the home based goalkeepers can give their foreign-based colleagues a run for their money.

Olorunleke is a household name in the Nigeria Professional Football League and looks certain to be the preferred one should Yusuf decide to give the home boys some game time since number one choice Maduka Okoye is in the squad,

Former U-23 Eagles captain made the cut for the double headers against Mexico and Ecuador.

This writer is of the opinion that alongside Innocent Bonke, Azubuike should have been considered for the 2022 FIFA World Cup playoffs against Ghana when Leicester City midfield general Wilfred Ndidi was ruled out due to injury

This could perhaps the last chance salon for the combative midfielder who was in the same U-23 side that won bronze in the 2016 Rio Olympics where erstwhile Super Eagles head coach Gernot Rohr picked Oghenekaro Etebo from.

Austin Eguavoen led the Super Eagles to the 2021 Africa Cup of Nations in Cameroon and although could not add more players to the team after injuries to some players, he did namecheck Royal Antwerp midfielder Alhassan Yusuf as a prospect for the team.

The player has his chance eventually to stake a claim in the team following his invitation for the friendlies.

Blessed with superb tackling abilities, his guile will surely pose a positive headache for the Eagles coached and it will ne interesting to see how the incoming substantive coach runs the rule in his midfield selections going forward.

With the refusal of Odion Ighalo and Emmanuel Dennis' clubs to release them for the 2021 Africa Cup of Nations in Cameroon under the guise of late invitations coming from the Nigeria Football Federation, there were hopes that Feyenoord striker Cyriel Dessers will make the squad. But he did not.

The Racing Genk loanee is back in the fold after strings of great performances in the league and in Europe.

Austin Eguavoen astonishingly claimed that he did not know the Belgium - born striker who has scored 20 goals in 45 appearances so far in 2021-2022 and was instrumental in leading Feyenoord to the final of the UEFA Conference League final where they will face AS Roma on May 25.

Enyimba striker Victor Mbaoma is one of the leading marksman in the Nigeria Profesional Football League with about 11 goals to his name this season.

The invitation of home based players to the team will be questioned if Mbaoma had missed out - unless though injury!

The quality of his finishes will ne on display if he makes the final 25 for the games and its only a matter of time before he moves to greener pastures abroad.