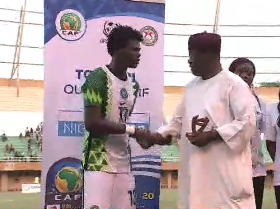 Flying Eagles assistant captain Daga Daniel picked up the official Man of the Match award after his impressive display for the national team in a 2-2 draw against Burkina Faso at the ongoing WAFU-UFOA B U20 Africa Cup of Nations qualifiers.

Daniel was named the most outstanding player on parade at the Stade Général Seyni Kountché, Niamey on the back of his impressive displays in the middle of the park.

Wearing number 13 at the back of his jersey, the promising teenager had a better performance today against Burkina Faso compared to the opener with Ghana in which he went the distance.

The Benue-born star is a good passer of the ball, can make amazing runs and dribbles, and has a good shooting power.

Aged sixteen, his career has grown by leaps and bounds over the last one year, starting three consecutive matches played by FC ONE Rockets prior to receiving a call-up to link up with the Flying Eagles for the 2023 U20 AFCON qualifiers.

Daniel was snapped up by Carabana Academy, the nursery for FC ONE Rockets, after featuring for Community Secondary Commercial School, Ibiaku Itam, Itu LGA of Akwa Ibom State in last year's Principal's Cup.

Ibrahim Muhammad was named Man of the Match in the Flying Eagles' 2-0 win over Ghana three days ago.