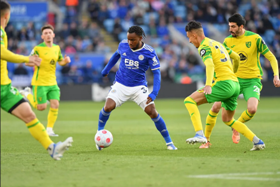 Allnigeriasoccer.com's round-up of Nigeria-eligible players that were in action for their respective clubs in the English Premier League on Wednesday, May 11, 2022.

Ademola Lookman started and was in action for 45 minutes while international teammate Kelechi Iheanacho was a non-playing substitute.

The Super Eagles winger could have scored in the 28th minute if not for the outstretched leg of Norwich City goalkeeper  Gunn.

Jamie Vardy with a deflected effort opened the scoring in the 54th minute and doubled the lead at minute 62 when he fired a left-footed shot past the keeper, before a half volley from James Maddisson made it 3-0.

Samuel Kalu made his full Premier League debut as Watford and Everton shared the spoils after playing a goalless draw at Vicarage Road.

A winter signing from Bordeaux in France, the winger had logged 46 minutes off the bench before the Toffees visited.

A minute to the end of the first half, Kalu tried his luck from a free-kick but it went over the bar.

Watford's first change of the evening saw Kalu replaced in the 86th minute, three minutes before Oghenekaro Etebo entered the game as a substitute for his eighth appearance in the Premier League.

Super Eagles assistant captain William Troost-Ekong was an unused ubstitute, while Everton's Alex Iwobi was impressive playing as a right wing-back yet again.