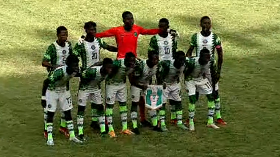 Nigeria U-20 national team, the Flying Eagles on Wednesday evening qualified for the semifinals of the WAFU regional sub tournament ahead of the 2023 CAF U-20 Africa Cup of Nations in Egypt following their 2-2 draw against Burkina Faso.

Allnigeriasoccer.com runs the rule over the players who were in action at the Stade Général Seyni Kountché, Niamey.

Nath Nwosu : The keeper had a more difficult game than he did against Ghana. Tried to unsettle the Burkinabe forward who converted the penalty but it proved futile. Made a good save on the dot of 45 minutes before the break. 6/10.

Augustine Njoku : Had a fairly good good game but was not doing his job when he vacated his position which culminated in the second goal for Burkina Faso. 6/10.

Lekan Oyedele : The number 20 was the team's left back on the day and did not stray forward so much. A decent game. 7/10.

Oluwatosin Adegbite (c) : The captain took no prisoners but was deemed to have committed a foul in the 18 yard box while trying to clear the ball when it was crossed into the vital area. 6/10.

David Sholumade : The other central defensive player who knows exactly when to mop up or carry the ball out of danger zone. Calm personality. He however gave away some free kicks that put the team under pressure. 6/10.

Daniel Daga : Awarded the Man of the Match award after his battling displays in the middle of the park. Won lots of balls in midfield. Better performance than against Ghana. 8.5/10.

Aminu Muhammad : The central midfielder was not as imperious as he was against Ghana. There was a moment he gave away the ball in a lackadaisical manner from a sloppy free kick. 5/10.

Samson Lawal : Lawal like Aminu Muhammad did not have his better game on the night. Missed Nigeria's first chance to score inside the penalty box in the first half. 5/10.

Ibrahim Muhammad : Forced an own goal midway through the first half. Only him knows if he meant that cross but nonetheless it was a good finish. 7.5/10.

Ibrahim Yahaya : Scored from the penalty spot. Has proven his mettle in this team with his burst of energy and trickery. 7.5/10.

Adams Olubi : Full of running. Pace and power is not an issue with him but his final decision has to improve. Replaced in the second half. 5/10.

Anas Hassan : The number 4 who came off the bench in the second half was keen to impress as he covered almost every blade of the field notably missing a scoring chance as he went box to box in search of a winner. 5/10.

Ahmed Abdullahi : Came off the bench like on the first match against Ghana. Had a good game but the jury is still out. Had a nasty injury that required medical attention. 5/10.