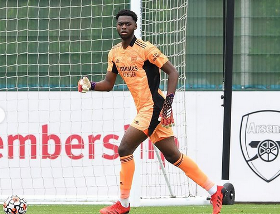 Through their official Twitter account, Arsenal have uploaded a video of the players making their way into the stadium.

Manager Mikel Arteta has announced his starting lineup, with the Spaniard selecting Aaron Ramsdale to be in between the sticks while Germany international Bernd Leno is on the bench as cover for the Three Lions goalkeeper.

The Arsenal are in the building 🏟

Okonkwo has been omitted from the matchday squad but he will be involved in the warm-up with the players.

The Hale End Academy product would climb the pecking order and into the matchday squad if either Ramsdale or Leno picks up an injury in the warm-up.

This season, Okonkwo has been called up on seven occasions for Premier League games but has yet to make his senior debut for his boyhood club.

A win against Tottenham Hotspur means Mikel Arteta's side will be guaranteed fourth spot with two games to spare.