Subscribe
Balogun makes bold prediction about Middlesbrough after return to Arsenal
Published: May 13, 2022 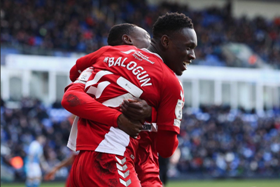 Folarin Balogun has posted a goodbye message to everyone associated with Middlesbrough following the completion of his loan deal with the Championship club.

Balogun departed Arsenal in the January transfer window in search of regular game time and ended up playing twenty one games in all competitions for Middlesbrough, scoring three goals and setting up three others in 1,078 minutes of action.

Having finished seventh in the Championship table and missing the playoffs by five points, the Hale End Academy product has made a bold prediction that Boro will return to the Premier League in the not too distant future.

Prior to their relegation to the Championship at the end of the 2016-2017 season, Middlesbrough had spent fifteen seasons combined in the Premier League and competed in the first tier of English Football on sixty-one occasions in the past.

Unfortunately we missed out on our goals, however Middlesbrough is a great club that will get where they belong �'�. Thank you to my team mates n fans who always welcomed me. Lots of love Balo pic.twitter.com/wZeFdRVUZv

"Unfortunately we missed out on our goals, however Middlesbrough is a great club that will get where they belong.," Balogun wrote on Twitter, accompanied by a video of his best moments in a Boro shirt.

"Thank you to my team mates n fans who always welcomed me. Lots of love  Balo".

Retired Nigeria international Yakubu Aiyegbeni was named Middlesbrough Player of the Season for 2005-2006, and scored 25 goals in 73 outings for the club in the Premier League.