Subscribe
'Not a bad thing to be compared to him' - Anjorin names the Chelsea star he looks up to for inspiration
Published: May 13, 2022 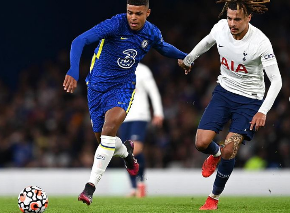 England U20 international of Nigerian descent Faustino Anjorin has revealed that he looks up to Chelsea first team star Ruben Loftus-Cheek for inspiration, adding that it's not a bad thing being compared to him.

Loftus-Cheek is a product of the Chelsea youth system, just like the Anglo-Nigerian starlet, and has established himself as a first team player after spending time on loan at Crystal Palace and Fulham.

The similarity does not end there as both midfielders suffered long-term injuries before working their way back to full fitness.

Loftus-Cheek, an England national teamer, suffered a ruptured Achilles in May 2019 that kept him on the sidelines for over a year, while Anjorin is now back on his feet after breaking a metatarsal during his loan spell with Lokomotiv Moscow.

Speaking to The Athletic (subscription required), Anjorin said : "I have always watched all the former youth players at Chelsea, as well as the other ones in the team, for inspiration.

"Obviously it’s because of the talent they have, how great they are. It is something I have wanted to follow since I was young.

"But I pay attention to Ruben in particular for what he is doing now and those obstacles that have existed for him."

Manager Thomas Tuchel had considered Anjorin for a role in the Chelsea first team this season, only for the midfielder to contract Covid-19 during pre-season preparations.

Anjorin added : "Ruben is an inspiration. What he has gone through is similar to me. I want to overcome it and be a role model for the people below me.

"Touch wood, I want to say the injuries and the issues I’ve been having up till now will mean that I have got them out of the way at the start so I can be free of them for the rest of my playing days.

"I got to spend time with Ruben in pre-season. That was the first time I got to speak with him properly.

"He’s a really nice guy. Ruben is a great player so it is not a bad thing to be compared to him. But I just like to be myself, to be different."

Anjorin made his senior debut for Chelsea in a Carabao Cup clash against Grimsby Town in September 2019 and has totaled five appearances in all competitions for the Blues.