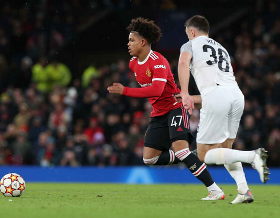 According to The Sun UK, two Manchester United first team players got into a physical altercation towards the end of their training session at Carrington on Thursday, May 12.

The players in attendance were surprised by the training ground bust-up, which brought a premature end to the session.

The two Manchester United players involved in the fight and whose names have not been mentioned had to be separated by their teammates.

It is confirmed that England U19 international of Nigerian descent Shola Shoretire was present at the training session on Thursday and must have witnessed the bust-up between the two first team stars.

The attacking midfielder trained with United's first team this week as he aims to convince interim manager Ralf Rangnick to include him on the roster for their final Premier League game of the season at Crystal Palace next weekend.

Manchester United, who are sixth in the provisional standings, need a win against the Eagles to avoid dropping into the Europa Conference League as West Ham United are three points behind and have a game in hand.