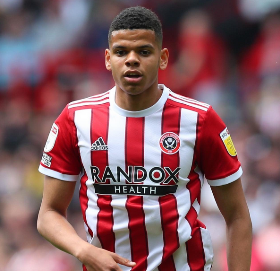 Huddersfield Town got their Championship playoff campaign underway with a 1-1 draw against Luton Town at Kenilworth Road on Friday evening.

Luton Town were plagued by injury problems before the clash as Nigeria-eligible trio Gabriel Osho, Fred Onyedinma and top scorer Elijah Adebayo were sidelined and left out of the matchday squad.

Chelsea loanee Faustino Anjorin was named in the Terriers matchday squad but stayed put on the bench for the entirety of the game.

Danel Sinani's eleventh minute opener was canceled out by Sonny Bradley on the half hour mark.

Anjorin will be hoping to be involved in the second leg which will be played at the John Smith's Stadium on Monday, May 16, 2022.

In the other semifinal played on Saturday, Nottingham Forest put themselves in a strong position to qualify for the final after a 2-1 win over Sheffield United at Bramall Lane.

Denmark U19 international of Nigerian descent, William Osula was an unused substitute for the Blades.

Jack Colback and Brennan Johnson scored to give Forest a two-goal cushion but United pulled a goal back in stoppage time when Robinson headed in from a corner.