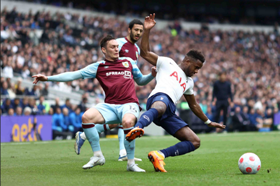 Tottenham struggled to create anything in the face of some brilliant defending by Burnley but were ahead at the break thanks to Harry Kane who scored what proved to be the winning goal in the eighth minute of stoppage time when he converted a spot kick.

The penalty awarded to Tottenham was one of the talking points of the game as referee Kevin Friend deemed the ball brushed the arm of Ashley Barnes after consulting the pitch side monitor.

Though Barnes would claim his arm was out of balance, former Super Eagles striker and 1994 Africa Cup of Nations winner Efan Ekoku backed the decision of the referee to award Tottenham Hotspur a penalty.

Ekoku criticized the Burnley number 10 for his poor defending in the build-up to conceding a penalty.

Speaking during commentary on the Premier League world feed, Ekoku said : "This will go against him Jim. No reason why Ashley Barnes should have his arm so wide. It's very, very dangerous defending, casual defending.

"He's in a tussle with Davinson Sanchez and for Barnes himself he sticks his arm, he won't get away with that, extremely risky.

"That's the only error that they've made from minute one to minute 48. I think he's going to get punished."

Nigerian defender Tobi Omole, who was registered on Tottenham Hotspur's main list for the Premier League, was not selected in the matchday squad by Antonio Conte.