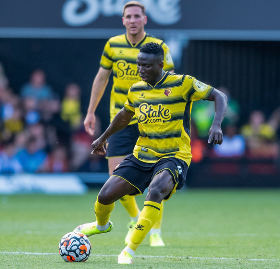 Allnigeriasoccer.com's round-up of Nigeria-eligible players that were in action for their respective clubs in the English Premier League on Sunday, May 15, 2022.

With manager Roy Hodgson initially naming an unchanged side from Wednesday's goalless draw with Everton, Samuel Kalu made his second start in the Premier League and went the distance.

The Hornets' second substitution saw Oghenekaro Etebo come off the bench in the 81st minute, William Troost-Ekong was an unused substitute and Emmanuel Dennis is currently sidelined by a knee issue so wasn't listed.

João Pedro put the Hornets ahead in the sixth minute but the Foxes were 2-1 up at halftime courtesy of goals from  James Maddison and Jamie Vardy.

In the second half, Harvey Barnes, Vardy again and Barnes with his second of the afternoon, got on the scoresheet.

Honours were even at Villa Park as Aston Villa and Crystal Palace played out a 1-1 draw.

Eberechi Eze made his fourth consecutive start in the Premier League for the first time this season but Michael Olise was absent from the matchday squad.

Midfielders Tim Iroegbunam and Carney Chukwuemeka were on the Aston Villa bench for the entirety of the game.

Ollie Watkins turned home a cross to break the deadlock in the 69th minute but Jeffrey Schlupp salvaged a point for the Eagles when he tapped home with nine minutes left.

Central defender Odel Offiah has to wait for the final matchday to see whether he will make his Premier League debut this season as he was an unused substitute for Brighton & Hove in their 1-1 draw with Leeds United at Elland Road.

The Seagulls had to settle for a draw as Danny Welbeck's first half opener was canceled out by Pascal Struijk in the second minute of second half stoppage time.

In a game of two halves, Jarrod Bowen scored twice to give the Londoners a 2-0 lead at the break but goals in the second half from Jack Grealish and Coufal (og) ensured the defending champions returned to Manchester with a point.

Alex Iwobi starts for Everton in the 1630 hours kickoff against Brentford at Goodison Park. The Bees are without tSuper Eagles midfielder Frank Onyeka who is still recovering from an ankle injury.