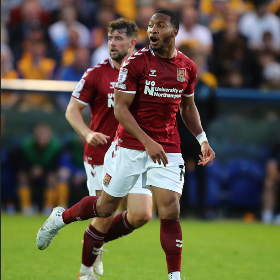 At the One Call Stadium in Nottinghamshire on Saturday, Mansfield Town beat Northampton 2-1 with exciting left-back Ali Koiki playing the full game for the visitors.

The Stags established a two-goal lead by 32 minutes after goals from strikers Rhys Oates and Jordan Bowery but Koiki reduced the deficit in the 61st minute.

The Anglo-Nigerian defender finished into the bottom corner from the edge of the area, five minutes after Leicester City loanee Joshua Eppiah entered the game as a substitute.

With 52 percent of the votes, Koiki was named Northampton's Man of the Match.

In the other semifinal played on Sunday, it's advantage Swindon Town after they recorded a 2-1 win over Port Vale at the County Ground.

Crystal Palace academy product Mandela Egbo started and was in action for 74 minutes for Swindon Town before he was replaced by former Reading youth team skipper Akin Odimayo.

Harry McKirdy glanced a header into the bottom corner to open the scoring in the 26th minute and doubled the advantage midway through the second half when he smashed home the rebound after Payne's effort was saved by the goalkeeper.

James Wilson pulled a goal back with seven minutes left on the clock to leave the tie finely poised.