...the complete Nigerian football portal
Subscribe
Onuachu comments on his Racing Genk future after receiving Golden Shoe from his fiancee
Published: May 16, 2022 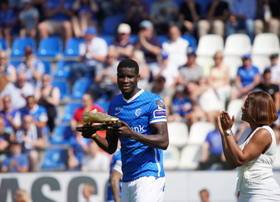 Paul Onuachu has admitted that he does not know what the future holds amid speculation linking him with a departure from Racing Genk in the summer transfer window.

The Nigeria international was careful not to be too optimistic about a transfer as almost everyone had tipped him to move on to pastures new last summer after a brilliant season that saw him score 37 goals for club and country, but nothing came out of it.

On a personal level, things have gone well for Onuachu again this season, with 23 goals in all competitions, one match to the end of the 2021-2022 campaign.

The 27-year-old received his real Golden Shoe award from his fiancee, Tracy just before kickoff in Genk's most recent game against Gent on Sunday, May 15.

Asked to comment on rumours of a possible departure from Genk, Onuachu told HLN post-match : "I don't know. I cannot answer that question now, I am still a Genk player, I'm still here so I don't know.

"There have been rumours since last summer but I'm still here so we'll see what will happen."

Onuachu admitted that he was surprised to receive the Golden Shoe from his fiancee and spoke of his disappointment at Genk losing 2-0 to Gent.

"It should have been well celebrated today but unfortunately we lost . I feel disappointed today that we lost, it would have been better if we won but we lost.

"It was a shock, she always comes to watch the games but I didn't expect that she would be on the pitch so I was surprised that she came on the pitch."