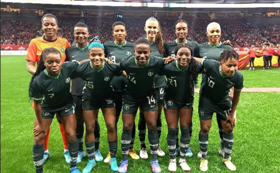 Head Coach Randy Waldrum has invited 32 players to the camp of the Super Falcons as the Cup holders get set for a two-week training camp in Morocco ahead of the 12th Women Africa Cup of Nations holding in that country, 2nd – 23rd July.

An analysis of the roster revealed that four goalkeepers, nine defenders, ten midfielders and nine strikers have been summoned for the training camp.

The roster is headlined by Barcelona striker Asisat Oshoala who recently won the Spanish Premiera Iberdrola Golden Boot for the 2021-2022 season with 20 goals to her name in nineteen league appearances.

Former England youth international Ashleigh Plumptre has been called up after an outstanding season with Leicester City, helping the Foxes escape relegation after a difficult start to the Women's Super League.

The training camp will start on 18th June in the North African kingdom, with all players already advised to arrive in Rabat on 17th June.

Nigeria's first match of the competition, at which Africa's four flagbearers to next year's FIFA Women's World Cup in Australia and New Zealand will emerge, is against the Banyana at the Complexe Sportif Prince Abdellah in Rabat on 4th July.