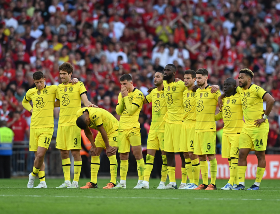 Liverpool won their second trophy of the season this past weekend, beating Chelsea 6-5 on penalties to lift the Emirates FA Cup for the first time since 2006.

In the shootout, Cesar Azpilicueta failed to convert Chelsea's second penalty and Liverpool winger Sadio Mane had a chance to win it but his kick was saved by his compatriot Edouard Mendy.

After Mason Mount surprisingly missed from the spot in sudden death, Tsimikas fired past the Chelsea goalkeeper for the winner.

Relive every moment of the penalty shootout from yesterday's #EmiratesFACup Final! 🤩 pic.twitter.com/ohJeMvUsph

Former Nigeria international Victor Ikepba has leapt to the defence of Mount and Mane, saying that even great players such as Cristiano Ronaldo, Lionel Messi and the legendary France midfielder Michel Platini have missed penalties in the past.

"Great players miss penalties - Messi, Ronaldo - so it can happen to anybody but it was a great game of football, the fans were out in numbers.

"At that moment Mane missed his penalty, everybody thought it would go to Chelsea."

With a goal involvement of 21 in the Premier League, Mason Mount is having an outstanding season and was recently named on the shortlist for the division's Young Player of the Year award.

Ikpeba thinks that the Chelsea midfielder was nervous before he stepped up to take the penalty.

The Monaco legend added : "It's not a guarantee when it comes to penalties, we've seen great players like Socrates, Platini miss penalties.

"Mason Mount is having a brilliant season but it was not a good timing from him. That moment he didn't even look up, the way he played it, it shows that he was a little bit nervous.

"The biggest problem of taking penalties is the pressure. You have to pick your spot, if you don't get it right you'll miss it".

Ikpeba missed a penalty in the shootout during the 2000 Africa Cup of Nations showpiece between the Super Eagles and Indomitable Lions, though television replays suggest that the ball crossed the line after coming off the crossbar.