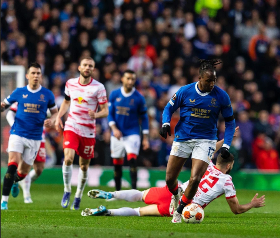 It is confirmed that central defenders Leon Balogun and Calvin Bassey, and attacking midfielder Joe Aribo were part of the Light Blues players that landed in Seville on Monday afternoon.

The squad headed for Seville after their final training session at the Rangers Training Center.

Balogun was the only Nigerian player given minutes as Rangers completed their Premiership campaign with a 3-1 win against Hearts at the weekend.

Aribo and Bassey were rested for Saturdays' trip to Tynecastle Park, all but suggesting that they will return to the starting lineup against Eintracht Frankfurt.

The three Super Eagles stars are hoping to join a select group of Nigerian players who have won the competition since it was rebranded the Europa League namely John Obi Mikel and Victor Moses with Chelsea and Samuel Chukwueze with Villarreal last season.

Rangers are faced with a tough task when they take on Eintracht Frankfurt as the Germans are unbeaten in this season's Europa League.