...the complete Nigerian football portal
Subscribe
"Four years ago I was an U18 footballer' - Rangers star Bassey ahead of special game vs Eagles
Published: May 17, 2022 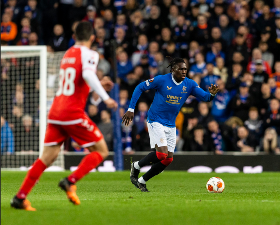 Calvin Bassey is set to play the biggest game of his young career when Rangers face off with Eintracht Frankfurt in the Europa League final on Wednesday evening.

The Super Eagles left-back admitted that the prospect of being involved against the Eagles is so special.

Bassey acknowledged that his career has grown by leaps and bounds as he was playing in the U18 Premier League with Leicester City four years ago.

The Italian-born defender has enjoyed a breakout season in both the Scottish Premiership and Europa League, setting up three goals in 39 appearances, thirty seven of which he started, and made his Nigeria debut two months ago in a World Cup qualifier versus Ghana.

Speaking to Rangers TV, Bassey said : "100 percent. When I look at it four years ago I was just like an U18s footballer, I'm in the youth team and now four years on I can potentially play in the Europa League final.

"It's just crazy just looking at how far I've come and how happy I am everyday for being here and just being a part of it."

There are no prizes for guessing that Bassey will be named in the starting lineup against the German Bundesliga side, considering that the 22-year-old has gone the distance in the last ten games played by Rangers in the Europa League and was rested for the trip to Hearts at the weekend.

The Rangers number 3 is aiming to become the second Nigerian fullback to win the Europa League in its various guises, after Chidi Odiah who won it with CSKA Moscow in 2005.