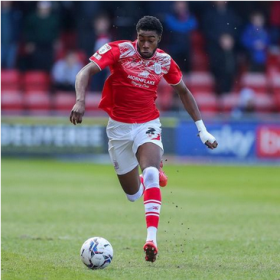 Arsenal are reportedly willing to listen to offers for talented fullback of Nigerian descent Ryan Alebiosu amid interest from two Championship clubs.

Alebiosu has been at Arsenal since the age of eight and has yet to be handed his first team debut by manager Mikel Arteta.

The 20-year-old embarked on his first loan spell in the second half of this season, joining League One side Crewe Alexandra, for whom he made six appearances in the third tier.

A back injury blighted his loan spell at the Railwaymen and he had to return to his parent club to receive treatment.

Before his loan move in January, he was a non-playing substitute in the Carabao Cup clash against Liverpool  and the Premier League meeting with Burnley.

Apart from his right-back role, Alebiosu is also comfortable playing as a right wing-back.