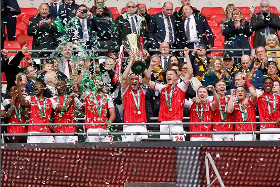 Following the conclusion of the 2021-2022 season, newly-promoted Championship club Rotherham United have announced their retained and released list, with decisions made on the futures of five players of Nigerian descent.

2011 Flying Eagles invitee Freddie Ladapo will depart the AESSEAL New York Stadium upon the expiry of his contract on June 30th 2022.

Ladapo is credited with 41 goals in 123 appearances for the Millers, with fifteen netted in the recently concluded season,

The Millers confirmed that discussions regarding a new contract have been opened with Super Eagles hopeful Michael Ihiekwe, whose contract expires at the end of next month.

The Liverpool academy product was a key player in the recently concluded season, making 42 appearances in the League One with three goals and four assists to his name from his centre-back position.

Arsenal's Hale End Academy product Tolaji Bola is one of fourteen players retained, along with two other players of Nigerian descent in the shape of Hakeem Odoffin and Joshua Kayode.