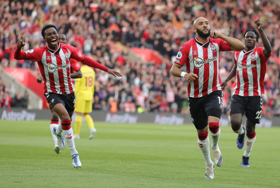 Nathan Tella bagged an assist for Southampton in a Premier League clash at the St Mary's Stadium on Tuesday night but it counted for nothing as the Saints were beaten 2-1 by quadruple-chasing Liverpool despite taking the lead.

Nathan Redmond with the aid of a kind deflection broke the deadlock inside a quarter of an hour, assisted by Tella.

The goal was allowed to stand despite the Liverpool players protesting that Jota was fouled by Lyanco in the build-up to the opener.

On 27 minutes, Takumi Minamino rattled a shot into the top corner and brought the Reds level on the South Coast.

Midway through the second half, Joel Matip headed a looping ball into the back of the net to give Liverpool the advantage.

Tella was booked in the 69th minute and a minute later he left the pitch to be replaced by Stuart Armstrong.

Southampton mounted some late pressure but Jurgen Klopp's side were able to hold on to victory and claim all three points - a win that takes them to 89 points, one less than Manchester City heading into the final day of the season.