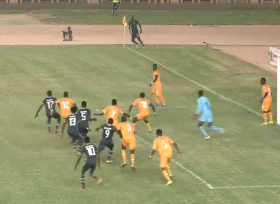 The following are the things we observed in the Flying Eagles' 2-1 win against Cote d’Ivoire that  saw the team reach the final of the WAFU-UFOA B Championship.

The Baby Elephants went to the ground quite easily in the game in an attempt to con the referee and ultimately have the Nigerians booked. It worked a lot for them in large spells but were powerless in stopping the two goals.

The youngster had a good outing against Ghana but in the successive games against Burkina Faso and Cote d’Ivoire, his hitherto assured game dwindled.

Muhammad gave away passes and was lucky not to have seen another yellow card against the Ivorians.

3. The Pressing Game Must Be 'Activated'

One major thing that worked for the Ivorians to large extent is their physical approach to the game. They forced the Nigerians to their own  half and tried to intimidate their investments are here too.

The Flying Eagles must also have this as part of their game-plan but with tact.

He got off the bench to score the decisive penalty.

Coach Ladan Bosso must ensure that the nippy forward starts in the final alongside Ibrahim Muhammad as their combination cause plenty of troubles for their opponents.