...the complete Nigerian football portal
Subscribe
'They'll use it against us' - Flying Eagles captain intelligent response to question about team squandering leads
Published: May 18, 2022 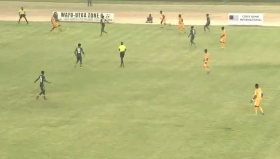 Nigeria have achieved their objective of qualifying for the 2023 Africa U20 Cup of Nations following a hard-fought 2-1 win over Ivory Coast in the semifinal of the WAFU-UFOA Zone B U-20 Championship on Tuesday night.

The final against Benin is not a priority as the primary aim of the Flying Eagles coach and Nigerians was for the team to get one of the two slots to the U20 AFCON.

With the exception of the 2-0 win over Ghana in their Group B opener, Nigeria have conceded in every game they've played and that's after taking the lead.

The Flying Eagles defence is marshaled by Enyimba's Tosin Adegbite, who also captains the team.

Adegbite was asked during the post-match press conference why the Nigeria U20s have a tendency to lose control of games.

"Football is a game of two teams and even if you are playing a handicapped team they will have their own chances too," Adegbite said at the post-match presser monitored by allnigeriasoccer.com.

"As my coach said we have enough time to prepare for the Nations Cup so we'll work on that."

On what exactly is the problem, Adegbite responded : "I can't say the problem, if I know the problem I can't tell the media as they will use it against us.

"It's something we are working in training and we'll get it right".

Adegbite has started each of the three matches played by the Flying Eagles in Niger and is partnered in central defence by Akwa United's David Sholumade.