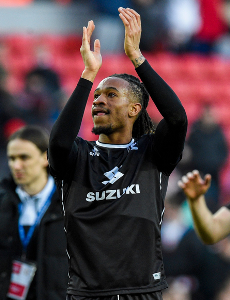 League One club Milton Keynes Dons have announced their retained and released list following the conclusion of the 2021-2022 season.

The Dons will be competing in the third tier of English football next term after they were beaten 2-1 on aggregate by Wycombe Wanderers in the League One semifinal playoffs.

MK Dons have made a contract offer to 2015 Nigeria U15 invitee David Kasumu and the midfielder would be extending his stay at the club if he puts pen to paper on the proposed deal.

#MKDons have announced their retained list following the conclusion of the 2021/22 campaign, with 14 players currently under contract for the upcoming season ✍️

A product of the MK Dons Academy, Kasumu has less than seven weeks to run on his current contract.

Kasumu joined MK Dons at the age of thirteen, rising through the ranks to sign a professional contract in December 2017.

Aged 22, he made his first team debut in a League Cup clash against Newport County in August 2016.