...the complete Nigerian football portal
Subscribe
'I hope they stay up' - Arsenal Invincible Lehmann on Iwobi's progress, backs Everton to beat the drop
Published: May 19, 2022 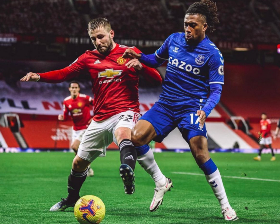 Arsenal Invincible Jens Lehmann says he is delighted with the progress made by Alex Iwobi since the winger departed the Emirates Stadium for Goodison Park in the summer of 2019.

The former Gunners goalkeeper revealed that Iwobi was still learning the ropes when he was at Arsenal but has now established himself as a Premier League player after joining Everton.

Ahead of Thursday night's meeting with Crystal Palace, Everton are sitting sixteenth in the provisional Premier League standings and just two points separate them from the relegation zone.

Lehmann is backing Frank Lampard's side to beat the drop come the end of the 2021-2022 season.

"When he was there at Arsenal he was a youngster and was developing and understanding the Premier League so he did not play always but he was very creative.

"Sometimes he was doing things we didn't expect. Now he's playing for Everton and I hope they are staying up."

A standing ovation from the home fans for Alex Iwobi, who makes way for Bernard with half an hour remaining

Good to see you back at the Emirates, @AlexIwobi �'�

Lehmann highlighted that Iwobi's transfer from Arsenal has not derailed his promising career as the Nigeria international is now playing week in, week out at Everton.

"Sometimes you need to step a little bit back to become better and bigger. That happened to most of the players so it's not a decline, it's just a learning curve.

"I see him playing nearly every week. He's going to become better and better, he's still young and has his best years ahead of him," Lehmann added.

Hale End Academy product Iwobi has gone the distance in each of the last ten matches played by Everton in the Premier League - something he did not manage to do throughout his fifteen-year association with Arsenal.