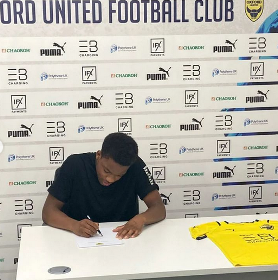 Allnigeriasoccer.com has been told that Iheanacho has put pen to paper on a two-year deal with the U's and will represent their U19 team as from next season.

Oxford United have pulled off a massive transfer coup to land the services of Iheanacho as more glamorous clubs were interested in his signature.

The talented striker switched to the Crystal Palace academy in the January transfer window but decided to move on to pastures new after the Eagles signed another attacker.

Beaten Europa League finalist this season, Glasgow Rangers invited him for trials with a view to offering him a contract.

Aston Villa and Coventry City were also contenders for his signature before Oxford United won the race.

Iheanacho's parents believe Oxford United can offer him a better pathway into their first team compared to his other suitors.

A quick and skillful striker, Iheanacho has been likened to former Tottenham Hotspur and Rangers star Jermain Defoe by his minders.