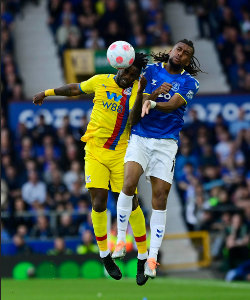 Allnigeriasoccer.com's round-up of Nigeria-eligible players that were in action for their respective clubs in the English Premier League on Thursday, May 19, 2022.

Everton are secure for next season after staging an incredible second half comeback to beat Crystal Palace 3-2.

Alex Iwobi made his eleventh straight start in the top-flight and continued in a right wing-back role.

Mateta powered a header past goalkeeper Pickford to open the scoring in the 21st minute, assisted by Eberechi Eze, and Ayew tapped the ball into the net to double the advantage in the 36th minute.

On 54 minutes, Michael Keane pulled one back with a brilliant finish, Richarlison finished from a difficult angle to make it 2-2 in the 75th minute and with five minutes left on the clock, Calvert-Lewin put the Toffees ahead when he headed past Butland.

At Stamford Bridge, honours were even as Chelsea and Leicester City played out a 1-1 draw.

Kelechi Iheanacho started and was in action for 63 minutes but his international teammate Ademola Lookman watched on from the bench for the entirety of the game.

James Maddison slotted home from 20 yards out to open the scoring inside six minutes but Marcos Alonso, with a volley, restored parity for the home side in the 34th minute.

Burnley got a precious point at Villa Park, playing a 1-1 draw with Aston Villa, to keep their Premier League fate in their own hands heading into the final weekend of the season.

England U19 international Carney Chukwuemeka played under an hour for Steven Gerrard's side and Tim Iroegbunam was an unused substitute for the home team.

Two minutes into the second half, Emi Buendía canceled out Ashley Barnes' penalty on the stroke of half-time.