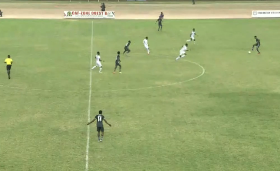 The Nigeria U-20 national team won the WAFU Zone B Championship in Niamey, Niger Republic on Friday night after an impressive 3-1 win over Benin courtesy of Tolulope Ojo's brace and Ibrahim Muhammad goal.

This was how the players performed during the game.

Nathaniel Nwosu : There was a moment of anxiety for Nigerians in the first half as the beanpole was left sprawling on the ground a few times after he vacated his position. The ball was however cleared out of danger. Had no answer to the goal he conceded. 6/10.

Augustine Njoku : The right back was not an easy outlet for the Benin forwards. Njoku was tactically disciplined. He made good darting runs down the channels and delivered some great crosses. 7/10.

Lekan Oyedele : The left back's position was the target for the opposition as they launched most of their onslaught from there. Delivered a great cross in the second half but the recipient wasted the chance. 6/10.

David Sholumade : Good at bringing the ball out of the back line, the central defender showed his good understanding with Oluwatosin Adegbite. 6/10.

Oluwatosin Adegbite : The captain made some great blocks and no prisoners. 7/10.

Daniel Daga : The two-time winner of the Man of the Match in the previous matches broke plays at will and was composed on the ball albeit he did concede possessions a few times. 7/10.

Samson Lawal  : The midfielder delivered good passes, losing the ball only on one occasion. 6/10.

Aminu Mohammad : Subbed off in the first second half. Aminu was great in the first game against Ghana but his performances in the subsequent games were not the same. 5/10.

Tolulope Ojo : Two-goal hero, Ojo scored from the spot then a screamer from long range for the second. Quality performance when it mattered most. 9/10.

Ibrahim Muhammad : Scored the third goal when he delicately chipped the ball over a stranded Benin goalkeeper. One of the brightest diamonds in the team. 8/10.

Adams Olubi  : Full of raining and industry but not much of an end product. 5/10.

Ibrahim Yahaya : Yahaya became the super sub for the team. He came off the bench and galvanized his teammates. Could have put his name on the scoresheet. 6/10.