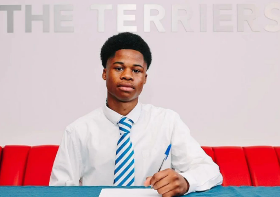 Nigeria-eligible winger Hazeem Bakre has ended speculation about his future by signing a pre-scholarship deal with the Terriers and the agreement between club and player will commence on July 1, 2022.

The two-year deal will keep him at Huddersfield Town until at least the end of the 2023-2024 season.

Premier League duo Burnley and Wolverhampton Wanderers were also interested in the signature of Bakre.

He trained with the Clarets and Wolves but Huddersfield pulled of a transfer coup by convincing him to join the club.

He was previously at Brighton & Hove academy until late 2019 when he decided to leave the club, citing the need to be closer to home.

Bakre has been described as a technical player who is able to use both feet and has been likened to Celtic winger Karamoko Dembélé.