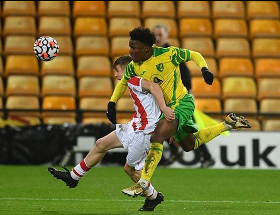 Relegated Premier League side Norwich City announced their released list on Friday ahead of their final match of the season against Tottenham Hotspur at Carrow Road.

One of the players not retained by the Canaries is Anglo-Nigerian defender Olatunde Okeowo, meaning he will leave the club as a free agent when his contract expires on June 30, 2022.

Okeowo signed scholarship forms with Norwich City in the summer of 2020 and was involved in majority of the games played by the club in the U18 Premier League, thirty seven in total across two seasons.

He was promoted to the U18 team after impressing at U16 and U17 level.

Belgian-Nigerian forward Tyrese Omotoye is under contract with Norwich City until June 30, 2024, while no update was provided on the future of former Chelsea schoolboy Dubem Eze, who joined the club on a scholarship deal last December.