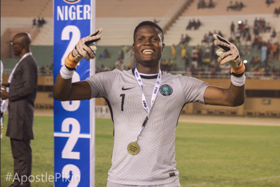 Flying Eagles goalkeeper Nathaniel Nwosu has dedicated Nigeria's win at the 2022 WAFU B U20 Championship to Chelsea icon Petr Čech.

The Nigeria U20s beat Benin 3-1 on Friday to win the trophy, courtesy of brilliant strikes from Tolulope Ojo (2) and Ibrahim Muhammad.

Nwosu revealed his admiration for Čech adding that the Premier League legend has been his role model since his formative years as a footballer.

The former Czech Republic goalkeeper, who called time on his career in May 2019, celebrated his 40th birthday on Friday, May 20.

After cementing his status as a legend at Chelsea, with whom he won the Champions League, Europa League, Premier League, FA Cup and League Cup, Čech moved to Arsenal in 2015 and his final game for the Emirates Stadium outfit was the Europa League showpiece against his former employers.

In quotes relayed by Savid News, Nwosu said : "Happy birthday Petr Cech, I’m happy you are adding another year on a day I’m winning a trophy.

"You have been my role model since aged five and I’m dedicating this trophy to you. Happy birthday my hero."

Cech has been a technical and performance advisor at Chelsea since the beginning of the 2019-2020 season.