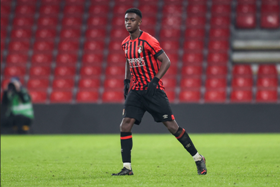 Through their official website, Premier League new boys Bournemouth have confirmed their retained and released list following the conclusion of the 2021-2022 season.

The Cherries have announced that academy star Ferdinand Okoh's scholarship deal has been extended.

The Anglo-Nigerian joined Bournemouth in the summer of 2020 following his release by Tottenham Hotspur.

Before moving to Tottenham Hotspur, he spent four years at the West Ham United academy.

Aged 17, Okoh was loaned out to Southern Premier South outfit Truro City on a work experience loan in February 2022.

He played an influential role in helping the Cherries win the EFL Youth Alliance and reach the fifth round of the FA Youth Cup in 2021-2022.

First team stars Dominic Solanke and Philip Billing are under contract with Bournemouth for next season.