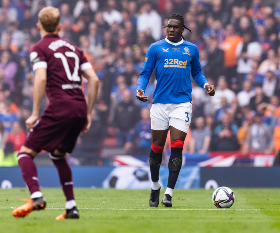 Glasgow Rangers have won the Scottish Cup, beating Heart of Midlothian 2-0 after extra-time in the final held at Hampden Park on Saturday.

Manager Giovanni van Bronckhorst  made five changes to his side, one of which saw Leon Balogun join international teammates Calvin Bassey and Joe Aribo in the starting lineup.

Hearts midfielder Peter Haring picked up an early booking for a cynical foul on Bassey after three minutes.

Though the first half ended goalless, both sides had chances to break the deadlock, with Simms hitting the post from close range and Aribo glanced a header wide after a fantastic delivery from Bassey.

Rangers played most of the football in the second half but couldn't find the breakthrough.

Fifteen minutes from time, Bassey forced a fine save from Hearts goalkeeper Craig Gordon, while Aribo and Balogun saw their headers go over the bar in the 77th and 84th minute respectively.

Rangers got the job done in the first half of extra-time to eventually seal a 2-0 win.

In the fourth minute, Ryan Jack smashed home from the edge of the box, before Scott Wright fired the ball into the net from a counter-attack in the 97th minute.