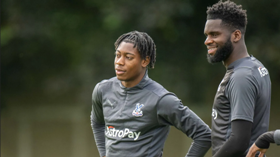 The official website of the Eagles has published the training images and the club's photographer snapped Adaramola during the training session at Copers Cope (as pictured).

Vieira previously hinted that he would be given minutes to the outstanding academy players in the last games of the season.

However, it remains to be seen whether the Frenchman will keep his word as Palace are targeting a top half finish and are facing the most successful team in Premier League history.

Adaramola made his professional debut under the legendary Arsenal captain in Palace's 2-0 win over Hartlepool in the fourth round of the Emirates FA Cup, coming off the bench for the last four minutes, before making his starting debut in the fifth round win versus Stoke City.

The promising defender was an unused substitute against Chelsea on February 19 - his only squad involvement to date for a Premier League game.

Michael Olise also attended the training session but it is unclear whether he trained fully with the rest of his teammates, given that he has been ruled out for the rest of the season due to injury.

Eberechi Eze's injury and fitness problems are over and the attacking midfielder is set to be involved against the Red Devils on Sunday.