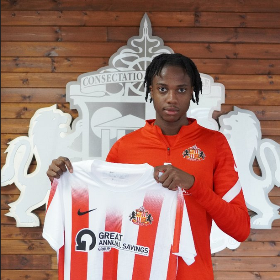 Following the conclusion of the 2021-2022 season, Championship newcomers Sunderland have published their retained and released list.

The Black Cats have confirmed that Lagos-born left-sided defender Ugonna Emenike will depart the club upon the expiry of his contract on June 30, 2022.

Emenike is one of the sixteen players released by Sunderland who were promoted to the second-tier of English football via the playoffs following a 2-0 win against Adebayo Akinfenwa's Wycombe Wanderers at Wembley last weekend.

He started his footballing career with a Sunday League team, went on to play for a College team, and had stops at Clapton and Leatherhead before signing for Sunderland.

Sunderland signed him on a professional deal in March 2022 following a successful trial in which he featured seven times for the youth teams.