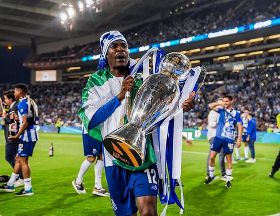 According to Portuguese sports newspaper Record (subscription required), Porto would be demanding 25 million euros (approximately N11.1 billion in Nigerian currency) should a team come for the left-back this summer.

The report added that Sanusi's asking price is high because he is attracting interest from the English Premier League.

The Nigerian has seen his stock rise and has become a darling to the Porto fans after his injury time game-winning strike against Benfica handed the Dragons their 30th league title on May 7, 2022.

And about two weeks later, the Super Eagle put up another impressive performance to help Porto win the Taça de Portugal Placard.